TIMELINE: The Philippines return to the Venice Art Biennale

The return of the Philippines to the Venice Art Biennale in 2015 was an opportunity for the country to re-establish and reaffirm its presence in the international contemporary art scene since the Philippines’ first participation at the prestigious event in 1964, when National Artists José Joya and Napoleón Abueva represented the country.

The idea of participating in the Venice Art Biennale was initially conceived in 2013, when Senator Loren Legarda posed the question during the budget hearings of the Department of Foreign Affairs (DFA) and of the cultural agencies.

Senator Legarda had made several visits to museums and contemporary art spaces in previous years, and also had the opportunity to visit Venice in November 2013 to see several national pavilions at the Art Biennale. Noting then that countries such as the Maldives and Tuvalu participated in the Biennale, the Senator was determined to have a national pavilion for the Philippines.

Emphasizing the necessity for the Philippines to engage the international community on the cultural level, the Senator convinced the National Commission for Culture and the Arts (NCCA) and the DFA to work on the Philippines’ entry to the 56th Venice Art Biennale in 2015.

The Secretary of Foreign Affairs and the Chairman of the NCCA jointly submitted a letter of intent to the President of La Biennale di Venezia, Paolo Baratta. In a letter dated January 17, 2014, Baratta extended a formal invitation to the Philippines to participate in the 56th Venice Art Biennale in 2015.

To facilitate coordination among government agencies involved, and to carry out the necessary preparations for the Philippines’ participation, a Coordinating Committee comprised primarily of the NCCA, the DFA and the Office of Senator Loren Legarda, was then created.

The NCCA Chairman serves as the Commissioner of the Philippine Pavilion.

To ensure a transparent and democratic selection process of the country’s official participation to be featured in the Philippine Pavilion at the Venice Art Biennale in 2015, an Open Call for Curatorial Proposals was released by the Coordinating Committee.

There was a significant number of submissions on deadline day itself, and a total of 16 curatorial proposals was received by the Coordinating Committee.

On May 18, a letter by Debora Rossi, Director of the Legal and Institutional Affairs of La Biennale di Venezia, explained the process of the application for the National Participation at the Biennale. It is stated in the letter that one of the core requirements of the procedure is that the Commissioner should be part of the Administration that represents the State.

On June 22, Consul General Marichu Mauro of the Philippine Consulate General in Milan personally delivered the response letter of Chairman de Leon to Rossi. It explained that the NCCA is the de facto Ministry of Culture of the Philippines and that de Leon is the rightful representative of the State.

On July 13, an invitation letter from La Biennale di Venezia was sent to NCCA Chairman de Leon, formally inviting the Philippines to participate in the 15th Venice Architecture Biennale in 2016.

On September 26, during the ICOMOS Meeting (International Council on Monuments and Sites) at the NCCA, Patrick Flores (curator of the Philippine pavilion at the Venice Art Biennale in 2015) made a presentation to invite architects and heritage workers to respond to the open call for curatorial proposals.

On September 28, a consultation meeting was held at the NCCA where Flores and Aurea Lopez (project head of the Coordinating Committee) presented the space of the Philippine Pavilion, and explained the meaning of architecture in the context of the Biennale. The 30 participants in attendance were architects from major architecture firms in the country, curators, artists and deans from educational institutions. This meeting was a vital part of the selection process. The deadline for submission of proposals was extended to 30 October 2015.

The Coordinating Committee received a total of 13 curatorial proposals. 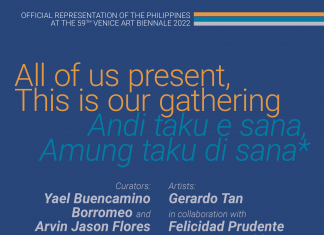 philarts - June 23, 2021
0
After careful deliberation of eleven (11) curatorial proposals, the exhibition All of us present, This is our gathering/Andi taku e sana, Amung...

Structures of Mutual Support – The Process

philarts - June 23, 2021
0
After careful deliberation of eleven (11) curatorial proposals, the exhibition All of us present, This is our gathering/Andi taku e sana, Amung...